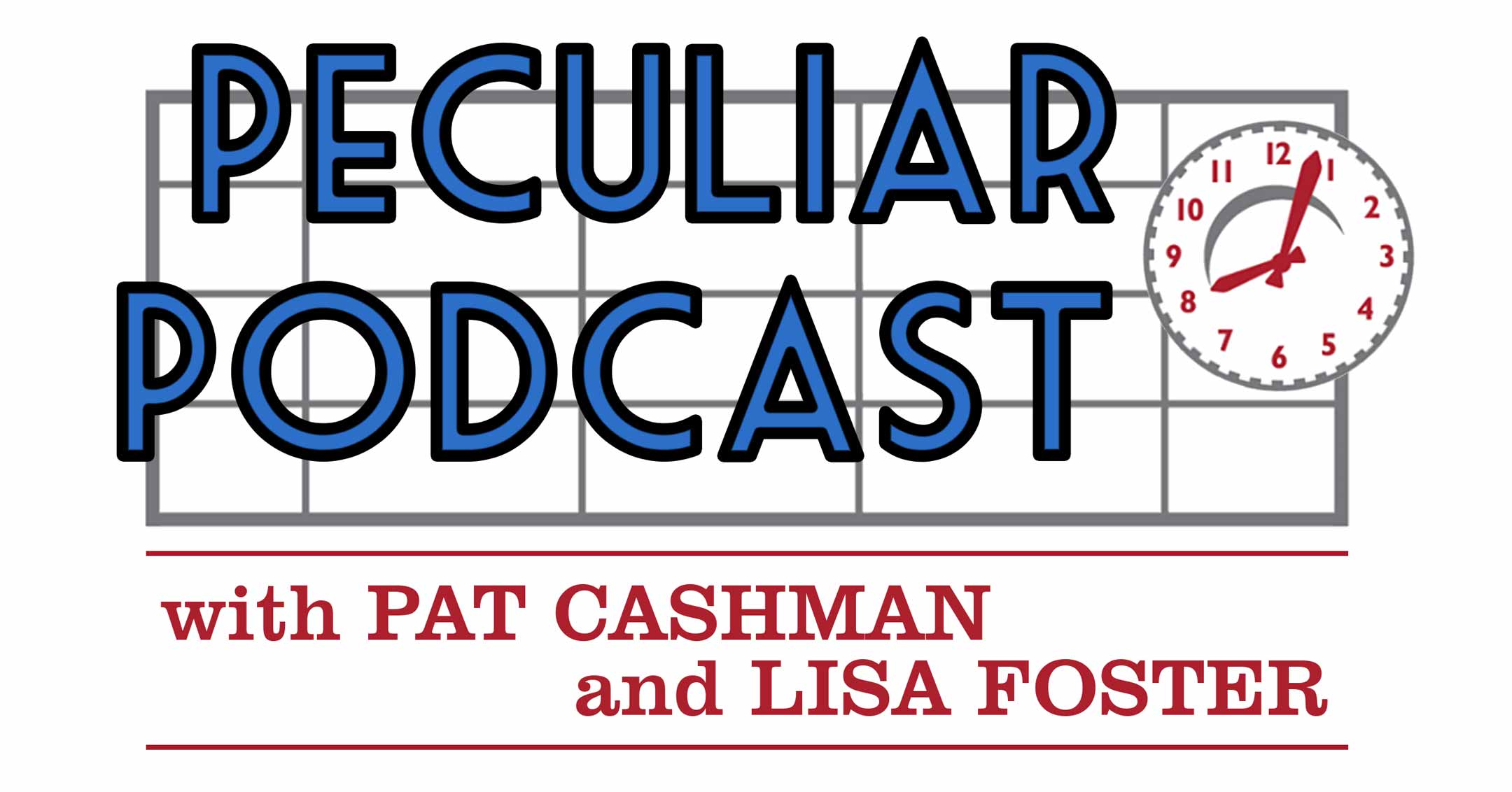 Lisa and Pat talk about the Queen’s passing. Lisa refuses to answer Pat’s question “What’s your all time favorite musical group?” There’s an odd woman that stands on the side of the road where Lisa lives and Pat thinks she’s a hooker. Pat has an idea for a new reality …

Pat is to camping what Trump is to the Iron Man Marathon. But he does it anyway. The former news anchor Dan Harris has been an inspiration to Lisa to help with her anxiety with his 10% Happier book and podcast. And should gun violence be photographed and shown to …

This is an encore presentation of one of our fan favorites that first aired back in December of 2017. Enjoy! ~Pat & Lisa

The Seattle Radio personalities (and we use that term loosely) Pat Cashman and Lisa Foster are BACK and on DEMAND talking about stuff you want to listen to with each new episode of “Peculiar Podcast”.

Pat Cashman has never been able to hold a job. As a result – for nearly four decades, he’s not only been a TV and radio host – but also an author, standup comic, TV weatherman, newspaper columnist, magazine essayist, sports reporter, voice talent in radio and TV commercials (Northwest and national.) His character voices are heard in countless cartoons and video games (including the worldwide most popular Super Smash Brothers Brawl – as well as being a TV and film writer, director and producer.

He is the recipient of more than two dozen Emmys – plus numerous marketing and advertising awards, including Clios, Addys, Best in the West, Tellys, Irises, Gabriels and Soundies (voice talent.)

Additionally – for several years – he was a featured performer, writer, director, producer and editor on the sketch comedy TV show “Almost Live“. The hit show ran (for 15 seasons) on Seattle’s KING TV, but also for two seasons on Comedy Central – and was twice syndicated worldwide. Subsequently, he co-created and starred in another sketch show The [206] (later retitled Up Late NW), airing throughout the Northwest in Seattle, Portland, Spokane, Eugene, and Medford.

Cashman was a performer and writer for the legendary Disney/PBS legendary show Bill Nye the Science Guy – as well as the show’s announcer. He’s also been featured in several motion pictures and TV shows, including National Geographic’s Amazing Planet, PBS’s Biz Kids, CBS’s Say What? and Fox’s Haywire – as well as featured on the Disney Channel and HBO.

He has also been front and center in numerous regional stage productions – including the male lead in the Fifth Avenue Theatre’s Hello, Dolly! – plus Gentlemen Prefer Blondes, Tartuffe, Lil’ Abner, and multiple live radio stage dramas. Lisa Foster’s voice over career has been around for a while.
Her broadcasting and voice over experience began in little ol’ Sacramento, CA back in 1991. Lisa landed her first on-air job as the weekend traffic reporter on KFBK 1530 AM, Sacramento’s premier leading news station.

Lisa moved her radio career to Seattle in 1992 where she was the traffic reporter that Seattle commuters relied upon on more than 14 different radio and TV stations. She started really learning the radio ropes on Pat Cashman’s Morning Show on KING 1090 that same year.

Lisa created more than 6 different “personas” on a variety of Seattle radio stations in the early 90’s, including “Kendall Elliott” on 107.7 The END, “Danielle Clark” on KJR, “Lisa Hunter” on 97.3 KBSG, and “Christine Russell” on KISW. She teamed up again with Cashman in 1996 to co-host his morning talk radio show on 100.7 The BUZZ, and again on KOMO AM 1000 in 1999. She went on to co-host the popular morning drive radio show “The Mitch & Lisa Show” on KLSY’s MIX 92.5. In addition to her radio work, Lisa has been the voice for many well-known companies, video games, corporate training, animation, and TV and radio ads.

Lisa began training and coaching emerging voice over talent in 2007, and is one of the best voice over coaches around. Her Creative Director skills really shine in the production booth, and she has produced and directed hundreds of audio projects in major cities across the U.S.

She has also written and performed stand-up comedy and has hosted many charity events and auctions in the Seattle area. Lisa Foster can also be heard on the popular podcast “Peculiar Podcast with Pat Cashman and Lisa Foster” that debuted in January 2012.